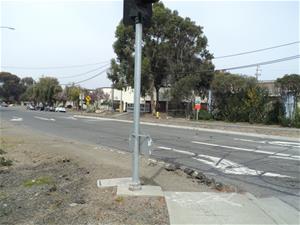 It provides a direct connection to the San Francisco Bay Trail, and will function as an interim gap closure of the Bay Trail between Bedwell Bayfront Park and Seaport Avenue, better serving both commute and recreational needs. The sidewalk gap closures and enhanced crosswalks will also provide pedestrian connections for transit riders accessing the area, including SamTrans service (Route 270).
Current status


The project is partially funded by a grant from the San Mateo County Transportation Authority's Bicycle and Pedestrian Program and includes the following elements: To install bicycle lanes on Haven Avenue, on-street parking modifications will be required on a portion of Haven Avenue, as there is not sufficient width to install bicycle lanes and provide on-street parking on both sides of the street. City Council and both the Bicycle and Transportation Commissions reviewed and approved these improvements in October and August 2015.

A portion of the Haven Avenue Streetscape project will be designed and constructed by St. Anton, the residential developers for the multifamily apartments on Haven Avenue, as part of a required mitigation measure from the City’s Housing Element.