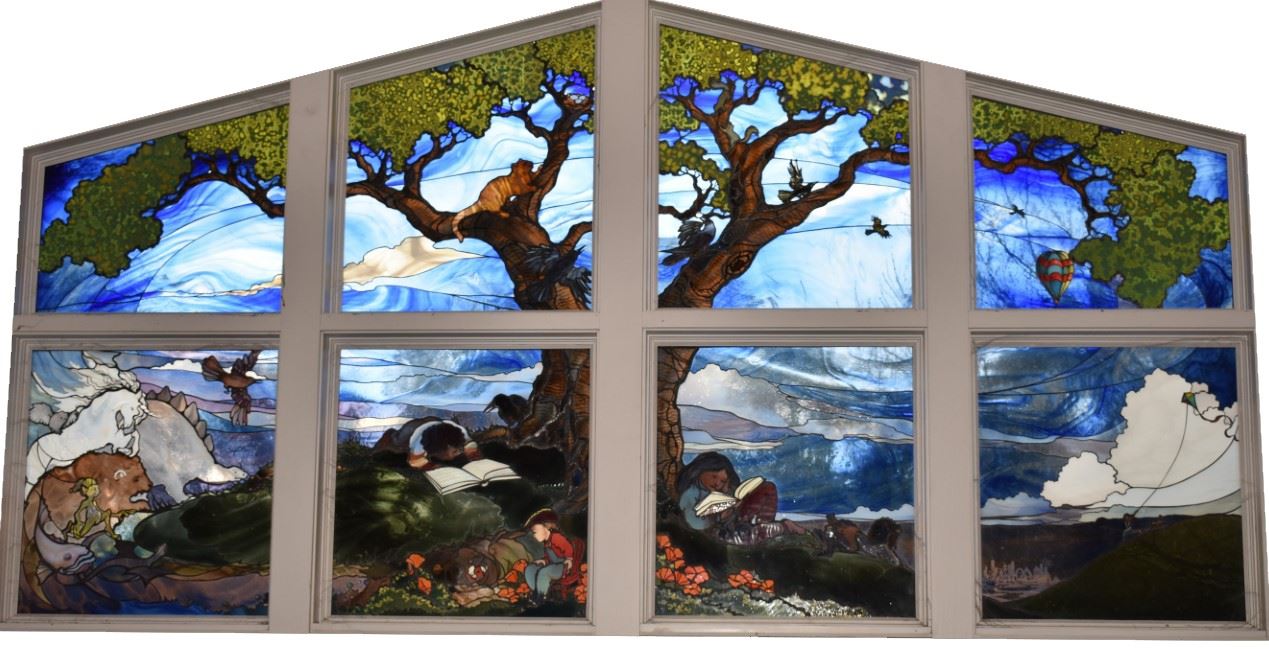 "Look Into It"
High on a hill beneath the canopy of a spreading oak tree are found three children. The two older ones are engrossed in their books and seem oblivious to the creatures who creep curiously up the hill from the left: an elf, a bear, a dinosaur, a unicorn, an owl, a fish, and a winged lizard. Leading them is a raven, significant in many cultures as a symbol of creative spirit, luck, wit, and mystery. One would perhaps expect these creatures to disappear should either pause to look about.

Looking over the shoulder of the boy on the left is another raven - perhaps Poe's famous bird or the upstart crow of Shakespearean fame? The other reader shares her side of the tree with a faun. Natural creature that he is, he seems content to simply be as he gazes down from his pastoral perch, a world apart.

The third child is too young to read for himself yet but seems engaged in conservation with a bespectacled mole. The mole is a symbol for the Friends of the Library who have been affectionately known as "Moles" for having their work sessions in the library basement. He is also a symbol of the older generation handing down knowledge to the younger. On the cover of the book under his arm appears a heart which is a heartfelt thanks to the Friends from the artist for funding this project.

The choice of children as the main subjects of the windows is meant to symbolize the open, inquiring mind and spirit of adventure one must bring to the discovery of what lies within the covers of a book. The quotes which are inscribed on the pages of the books in the window make reference to this thought and while not legible to the casual observer, might be read with a more determined effort.

High above, in the uppermost branches of the tree, one finds a bird's nest with eggs in it - threatened by the presence of a cat who appears to have discovered them. This suggests many of life's relationships and lessons: beginnings / endings, life / death, hope in the face of danger - or, from the perspective of the cat, opportunity, hidden treasure discovered, or at least a nice breakfast!

There are 5 more ravens - one of them with a stolen jewel in his beak - flying up through the tree and away into the picture, leading the viewer's eye toward a distant hot air balloon. This with the view of a girl running with a kite on the hill beyond the hill suggests the phrase "flights of fancy." The eye spirals around and down the valley to a city in the far distance which is depicted as a city of the future (in optimistic light) with gleaming spires and towers, water, and trees.

The Artist
"Look Into It" was designed by artist Pamela Mengers Hodges, and was constructed by her and her husband, Tim Hodges, at Lakehouse Studios in Grass Valley, California. The couple's two-year-old son, Camen Alexander, served as the model for the little boy in the window talking to the mole.