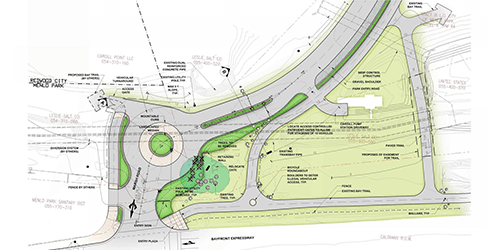 The Bedwell Bayfront Park entrance improvements project will reconfigure the park entrance to increase public awareness and visibility of the park, create an attractive entry experience, and improve access to the available recreational resources to accommodate a growing population and user demand. Specific elements of the project include:


Bedwell Bayfront Park is the City’s largest park, consisting of approximately 160 acres, and is the only City-owned open space on the San Francisco Bay. Originally a sanitary landfill, construction of Bedwell Bayfront Park was completed in 1995. Currently, the park is designed as a passive open space with minimal improvements, including bike/pedestrian trails and restrooms. Users enjoy “passive-recreation” through activities that include hiking, running, bicycling, dog walking, bird watching, kite flying and photography. Staff manage and maintain the park grounds as well as the landfill components, which include a gas and leachate collection system and a flare.

In May 2015, the City Council nominated portions of baylands in Menlo Park and East Palo Alto as a Priority Conservation Area in coordination with the City of East Palo Alto and the Midpeninsula Regional Open Space District. In its simplest form, a priority conservation area (PCA) identifies portions of land that represent regionally significant open space areas that have conservation, restoration and/or recreation value and positions those areas for access to potential funding sources. The Menlo Park and East Palo Alto Baylands PCA was subsequently approved by the Association of Bay Area Governments. Bedwell Bayfront Park is within the designated PCA.

The City Council adopted the Bedwell Bayfront Park master plan in November 2017. The master plan included recommendations to enhance the park entrance to make it a more pleasant experience and create a sense of arrival.

In November 2018, staff developed a preliminary project design based on community input received during the master plan process. The design was refined based on a review of site constraints and pedestrian, bicycle and vehicular access requirements.

In January 2019, the Metropolitan Transportation Commission (MTC) issued a call for grant funding proposals for projects that improved the conservation, restoration, and/or recreational value of areas within or connected to designated PCAs. Staff submitted a PCA grant proposal for the project in July 2019. In December 2019, staff was notified that MTC had approved a grant award in the amount of $520,000 for the project.

The project is currently in the initial design development phase, consisting of site investigative work, environmental review and assessment, and further plan refinement.

Project construction is anticipated to begin in late 2022.