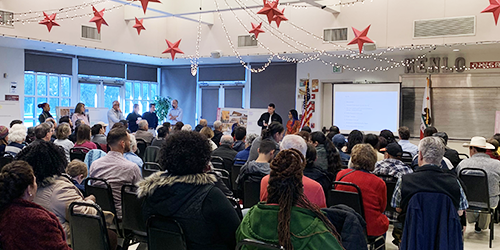 On January 11, 2020, a community meeting was held at the Menlo Park Senior Center to introduce the project and report on due diligence work that had been completed to date. Hart Howerton, the project architect, presented on potential concepts that would be a part of the proposed new facility.

On January 14, 2020, the City Council received an informational item staff report that included Facebook's offer and outlined staff work needed to prepare the next report to the City Council on January 28, 2020.

On January 24, 2020, the City Council ad hoc subcommittee held a community meeting at the Menlo Park Senior Center to preview the action item report that will be presented to the City Council on January 28, 2020.
On January 28, 2020, the City Council voted 4-0 (Vice Mayor Combs recused) to approve the resolution of intent to collaborate with Facebook and the community on the project, including the 10 action item points in the resolution, and requested the City Council subcommittee (Mayor Taylor and Councilmember Carlton) develop the naming process timeline for the facility as soon as possible.
On February 9, 2020, a second community meeting was held  to review the public comments from the Jan. 11 meeting, the project constraints, timeline and next steps. In addition, small group discussions offered participants an opportunity to prioritize and share their ideas for the different parts of the new facility: senior center, fitness center, meeting and classrooms, youth center (child care), library and pool.

On February 11, 2020, the City Council held a study session on interim services. This discussion focused on the service levels and types of services to be offered during construction.

On February 25, 2020, the City Council took action to appropriate $1 million for interim services and agreed to call special meetings with 24-hour notice to approve contracts above $75,000 for related services, as needed.

On October 12 (continued from Oct. 5) – The Planning Commission held a study session to review the project for future architectural control to include demolishing the existing Onetta Harris Community Center, Menlo Park Senior Center, Belle Haven Youth Center and Belle Haven Pool, and construct a new multigenerational community campus incorporating all of the existing facilities and a relocated branch library. The proposal also included a future request for a use permit for the use and storage of hazardous materials including pool chemicals and diesel fuel for a backup generator.
On October 13 – The City Council considers which City requested work to accompany Facebook's offer to rebuild community facilities at 100-110 Terminal Ave. Some of the items under consideration include a new swimming pool, upgrading the building to a Red Cross evacuation center, deploying an emergency backup power generator, pursuing LEED Platinum or equivalent designation, deconstructions versus demolition, extending recycled water to the site, undergrounding utilities and more.
November 10 – The City Council considered and approved funding options for the City requested work to accompany Facebook’s offer to rebuild community facilities located at 100-110 Terminal Avenue and the plan for interim services during construction.

December 14 – The Planning Commission voted to make a recommendation for project approval. The Planning Commission recommendation will be forwarded to the City Council for its consideration and final decision. The City Council expects to consider the project approval in January 2021.
January 12, 2021 – City Council made final approvals for the Menlo Park Community Campus project located at 100-110 Terminal Avenue. This included a public hearing, architectural control for the new facility, use permit for use and storage of hazardous materials to include diesel for a backup mobile generator and pool chemicals, and approval to execute the funding and improvement agreement with Facebook.