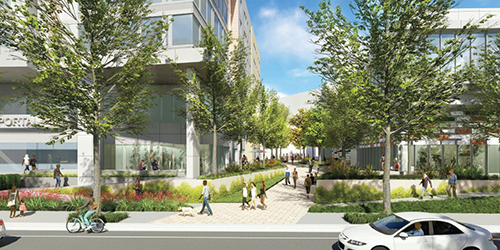 On February 25, 2021, the City published a notice of availability (NOA) and released the draft focused environmental impact report (EIR) for the project. The City is now accepting comments on the draft EIR through the 45-day comment period that will close at 5 p.m., Wednesday, April 14, 2021. The Planning Commission will hold a draft EIR public hearing and a general study session on the proposed project via GoToMeeting Webinar or Zoom, at its meeting on Monday, March 22, 2021. The NOA and draft EIR are available on the City’s development project environmental documents webpage.

During the development of the draft EIR, the applicant resubmitted project plans that include the following project refinements:
Previously on January 27, 2020, the proposal was reviewed at a Planning Commission for the EIR scoping session and study session. At the meeting the Planning Commission and community provided feedback on the proposed project and what topics could be studied in the focused EIR.

On July 22, 2019, the Planning Commission held a study session to review an initial version of the proposed project. The Commission's feedback on the proposal included the following points:

An Initial Study for the project was prepared and evaluated the potential environmental impacts of the proposed project and determine what level of additional environmental review would be appropriate, and was released on January 7, 2020, with a public review period from January 7, 2020 to February 7, 2020. Comments received on the initial study and scope and content of the EIR are included on the environmental documents page. In accordance with the requirements outlined in Section 15168 of the CEQA Guidelines, the project-level Initial Study was prepared to disclose the relevant impacts and mitigation measures addressed in the certified program-level ConnectMenlo EIR and discuss whether the project is within the parameters of the ConnectMenlo EIR or additional analysis would be necessary.

In addition, as a result of the settlement agreement between the City of Menlo Park and the City of East Palo Alto, housing and transportation are required to be analyzed. Based on the findings of the Initial Study, a Draft EIR has been prepared and will be included with the Notice of Availability (NOA) for the proposed project. The focused Draft EIR, technical appendices, and NOA were released on February 25, 2021 and are available on the City's development project environmental documents webpage for review.